Having a record of 9 and 10 has never felt as good to a team as it does for Norton Carolina! Winning as the Tar Heels did, besting an equally short-handed Miami team, showed that being ready to shoot, taking good shots, hustling on defense, and limiting turnovers is a winning formula.

Brandon Robinson missed Wednesday’s game at Virginia Tech as a precaution, after an auto accident a few days earlier, but returned to another career game performance with 29 points, including 6/10 on 3-pointers. Add Christian Keeling 4/6 for 9 points in 15 minutes and Justin Pierce 4/8 with 9 points in 17 minutes, and the team finally got the needed strong play expected from the two graduate transfers.

UNC had its best game from the floor all year, shooting 58% overall, while going 10/23 from behind the arc, with five different players scoring from deep. Garrison Brooks (14 points/5 rebounds) and Armando Bacot (19 point/12 rebounds) were steady, but the Tar Heels also got strong games from Andrew Platek and Leaky Black.

On a historical note, Roy Williams earned coaching win number 880, surpassing mentor Dean Smith in career wins, but as Williams noted, getting win number 9 for this team was much more important. 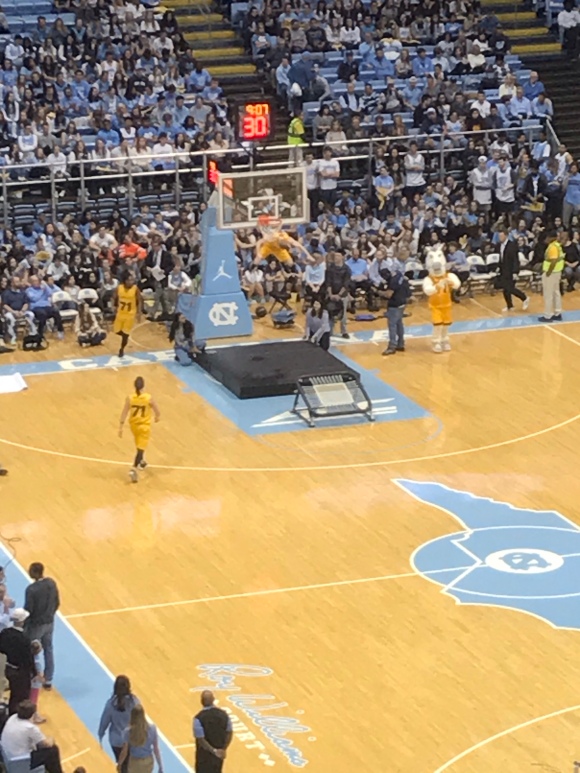 East Carolina improved to 7-8 with a 62-59 win over 8-8 University of South Florida.  The Pirates are now 1-1 in conference play with SMU visiting for a nationally broadcast contest on Saturday.  ECU lead 51-38 after going 9 of 11 from the floor to start the second half, before USF outscored the Pirates 11-4 to pull within 55-49 with 7:49 to play.  The last minute of the game was intense as a David Collins layup pulled USF within 59-60 before two Tristen Newton free throws gave ECU the final 3-point margin with 15 seconds remaining.  Collins was able to get off two 3-point shots int he last 12 seconds, missing on the first, and having the second shot negated by a perfectly timed Jayden Gardner block.

Normally, 50, 45, and 85 (field goal, 3-point, and free throw percentage) shooting in the second half gets a win for North Carolina. But this is no normal season for the Tar Heels. When a team misses their first 15 attempts from the floor, this is not a normal season. When more than 13 minutes tick off the clock before the home team at the Smith Center scores from the floor, this is not a normal season. When that home team trails Georgia Tech, or any team, 27-4 to start a game, this is not a normal season. When UNC players miss the same defensive assignments for a whole game; multiple games, this is not a normal season. When players haven’t figured out, after 14 games, that it takes head and heart to win, this is not a normal season. When players are not focused for a milestone game, this is not a normal season. THIS IS NOT A NORMAL SEASON!
North Carolina played a respectable second half, and put together a nice run to cut the 24-point Georgia Tech lead to single digits, but the missed assignments on defense, and resiliency of Tech’s players stood out. The Yellow Jackets improved their shooting from the floor to 63 percent in the second half, finishing at 59 percent for the game, while improving to 60 percent on 3-point attempts in the second half, and maintaining a 75 percent clip from the free throw line. Tech also forced 15 turnovers, while only giving up the ball 13 times, nicely below their season average of 17 giveaways.
There is cause for alarm if you expected the Tar Heels to be poised, and showing improvement at this point in the season. It’s hard to put the first 13 minutes of the game to the side, but look at the play over the next 13 minutes. Yes, UNC gave up 49 points in the second half, but they scored 56. Yes, they missed assignments, but disrupted Tech’s flow with traps, and showed toughness on defense outside the paint. It’s a team game. Garrison Brooks played the offensive game of his career, while Armando Bacot looked lost, and only played 16 minutes. Leaky Black had a positive game scoring 8 points on 4 of 7 shooting, with no turnovers, and a steady defensive game, while Brandon Robinson scored 12 points on 4-of 11 shooting, hitting four three-pointers, but the first half turnovers hurt. Jeremiah Francis was off from the floor, and had three careless turnovers, while missing multiple defensive assignments, but showed flashes of hope. Justin Pierce continues to show improvement, contributing 11 points in 24 minutes, but still hesitates to shoot when open. Christian Keeling shot the ball with less hesitation, going a respectable 3 for 5 from the floor, but four turnovers in 16 minutes is not acceptable.
At 8-6, many teams would panic. Not yet! North Carolina has 17 games left before the ACC Tournament. Expect a few more losses, but expect improvement on defense, and better offensive flow as well. Some have already written off the Tar Heels, but THIS IS NOT A NORMAL SEASON!